skip to main | skip to sidebar

I haven't posted here forever, but to read and see photos from my unearthing of a massive collection of 35mm old school kung fu prints, go here. You'll see photos like this: 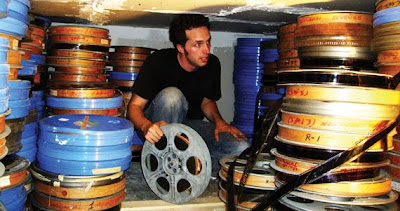 Don't miss out on the Old School Kung Fu Masters film series I'm currently putting on. Tonight is the second movie in the series, Shaolin Vs. Lama. It's one of the best kung fu movies of all time, and the print is in pristine condition (seriously, it could pass for a new print). Watch a drunken kung fu master teach the "Buddha finger" technique to fight back against the non-stop vicious assaults of the villainous Tibetan Lama (not a llama). The other films in the series will be Fatal Flying Guillotine, Invincible Shaolin, and another screening of Seven Grandmasters. The first film was 36th Chamber of Shaolin this last Saturday, if you missed it, hang your head in shame. 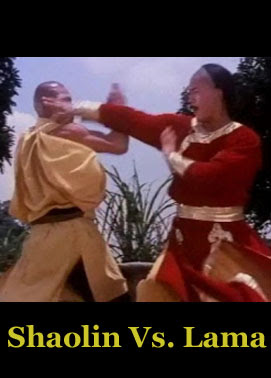 Oh yeah, this is what it's all about. I've wanted to show this movie forever, but there were no known 35mm prints. Last month I found a film collector who had dug a print out of a dumpster behind a movie in the late 70's. It sat in his basement ever since, until he sold it to me. The print is in excellent condition, and this is one of the top five kung fu movies of all time! This is Joseph Kuo's masterpiece, and that's saying a lot for the man who also directed Mystery of Chessboxing, 18 Bronzemen, and Born Invincible. The movie is pure, non-stop kung fu mayhem, with all the best old school sound effects, fighting styles, martial arts weapons, and silver-haired villains with huge sideburns and maniacal laughter. It also features the best monkey-style kung fu fight in movie history.

Saturday June 27th at 7:45 on the Hollywood Theatre's 50 foot screen. I don't care where you live, don't miss this! 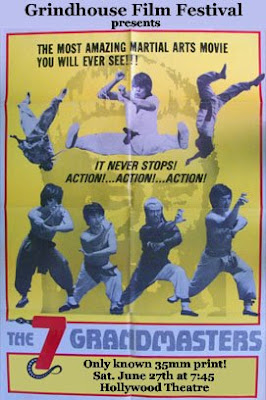 The cast of Avenging Eagle 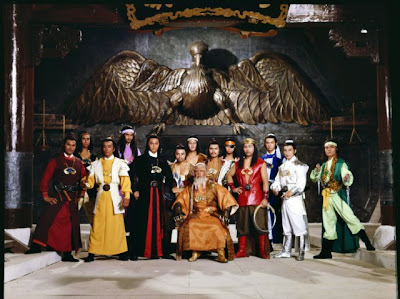 Wang Lung Wei looking like a gangster. We'll be seeing Wang go up against Gordon Liu next Saturday (the 26th) at the 35mm screening of Shaolin vs. Wu Tang. Don't miss it. The opening credit sequence from 1977's Iron Monkey starring Chen Kuan Tai. This is a straight up revenge movie that includes one of my favorite training sequences with the Bitter Monk teaching the Monkey Fist style.

Posted by Grandmaster at 6:46 PM 2 comments:

Seattle Double Feature and The Taking of Reels 1-2-3

Me and Black Rob invaded Seattle this last weekend with a carload of film to put on a Kung Fu Double Feature. The theater was filled to capacity with an energized audience, Eagle's Shadow brought the house down, and I think a couple people even liked Devil Woman. Before the show we met up with a couple of wild ass print collectors including a guy whose house is literally filled with film. The highlight was the collector who pulled some kung fu odd reels out of a closet to sell to us. The exploitation movie gods smiled upon us and we realized that the reels 1,2, and 3 matched a reels 4 and 5 we've had for a long time. Another Ng See Yuen/Woo Ping classic is saved! We set up the hand rewinds in the hotel room to inspect the fu. Check the photos (click on them for in-your-face action) Inspecting the fu at the hotel
Posted by Grandmaster at 10:34 AM 1 comment:

Evolution of the Flying Guillotine

A quick study of the most ferocious and gruesome weapon in cinema history. The original 1974 Shaw Brothers film The Flying Guillotine had Chen Kuan Tai battling this lethal device. Thrown with lightning quick accuracy, the weapon lands on the top of the victim's head, a hood drops over their face, and when the chain is pulled, the razor sharp blades rip into the neck tearing the head clean off. With a small army of decapitation assassins after him, Chen Kuan Tai must find a way to defeat the flying guillotine. The original guillotine design from this film is intricately ornate, but somewhat heavy and clunky. Although the assassins learn to be incredibly accurate, there was definitely room for design improvement.

The movie was a smash hit with kung fu fans. At the same time, renegade kung fu director and star Jimmy Wang Yu was coming off of the success of his film One Armed Boxer (capitalizing off of his earlier Shaw Brothers One Armed Swordsman series) In a fit of genius, Jimmy decided to combine his crippled hero with the decapitation device in the ultimate martial arts showdown. 1975's One Armed Boxer Vs. The Flying Guillotine (better known as Master of the Flying Guillotine) was the result, and is the best of the flying guillotine movies. Jimmy also greatly improved on the guillotine's design. This weapon was compact and folded in on itself. It also appeared to be lighter, and the blades were given a much more intimidating shark's teeth look.

In 1977 the low budget Fatal Flying Guillotine hit the scene. This movie upped the ante by featuring a villain sporting two flying guillotines, each with motorized spinning blades. Resembling small flying lawnmowers, the powered blades were a frightening improvement, but the speed and trajectory of the guillotines seemed to be adversely affected by the weight of the new blades.

Shaw Brothers dipped back in the pool in 1978 with Flying Guillotine 2. They kept with the original guillotine design from their first film, and not only did this movie feature multiple flying guillotines in use at the same time, but also multiple villainous LO LIEH'S. In the same year, Shaw Brothers also released Vengeful Beauty which was a sort of third installment in their series.

Protect your neck, motherfucker.
Posted by Grandmaster at 3:13 AM 6 comments: